Banned Books Week is an annual event that is usually held in the last week of September.  It was first started in 1982 in response to books being challenged for their content in schools, bookstores and libraries.  The American Library Association, the American Booksellers Associators and several other groups sponsor this event each year.

What does it mean for a book to be banned?
In general, book banning occurs when someone (parent, student, community member, etc) asks for a school, library, bookstore, or class to remove a certain book, or not assign it as required or suggested reading.  Most public libraries and schools have challenged book procedures in place that require a committee to examine the book, but not everyone follows these rules. The consequences vary from a book being removed from libraries, returned to them, or restricted in some way.  Conversely, a book getting challenged often leads more people to want to read it.

Why do books get banned?
Sometimes people try to get a book banned because they have a moral objection to the content (i.e. thinking Harry Potter could lead children to practice witchcraft).  Other books were banned by totalitarian regimes that realized certain books could threaten their power (i.e. the USSR banning Animal Farm). And some reasons are just kind of ridiculous (i.e. wanting to ban The Diary of Anne Frank from being assigned because it’s “too depressing”.)

Some of the Most Challenged Books of 2017: 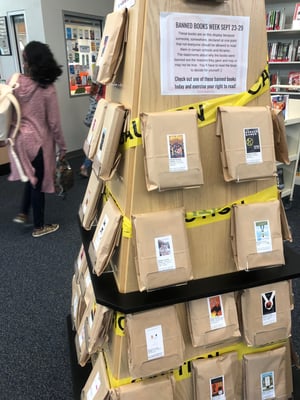 (By the way, the top ten most challenged books from last year include New York Times Bestsellers and books that have won the National Book Award, the Lambda Literary Award, Stonewall Honor Award and the Pulitzer Prize.)